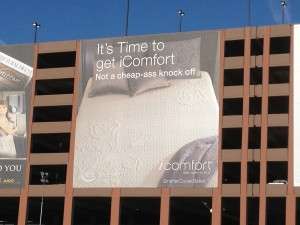 In case you haven’t heard, at Las Vegas Furniture Market, Serta had a 40-foot banner hanging from the side of the building that said, “It’s Time to get iComfort, Not a cheap-ass knock off.”

Boy did that stir the pot!

You heard people saying it was unnecessary and that Serta should have more class. Others pointed out that Serta could have brought a strong message without using the words “cheap-ass.” Some couldn’t believe Serta would connect ITS brand with something so juvenile.

Regardless of the opinions, here’s the reality:

At the end of the day, if you are making a decision about the 40-foot banner, I think you have to ask, “Will this banner have a net negative affect?” Given that it was on display for a trade audience only, I think it did exactly what it was designed to do: hijack the buzz. From a marketing perspective, I don’t think the message lines up with the iComfort brand, but it does line up with Serta CEO Bob Sherman.

Bob told me his team delivered the banner idea as a joke, along with a few other concepts. He liked it so much he went with it. When I saw the banner, I thought to myself, “Rick Anderson with Tempur-Pedic has to be reading that saying to himself, ‘Ugh Bob, YOU are the cheap-ass knock off!’” Sure enough, in the Furniture Today panel discussion where Bob and Rick shared the stage, Bob acknowledged that sentiment poking fun at himself and Serta. It made for a great moment, and the crowd loved it!

I think it was funny. I am not saying it connects to any overall brand strategy, but it was FUNNY and I think everybody should lighten up a little. After all, it’s Vegas baby!

What do you think about Serta’s banner? Tasteless or genius? Leave your comments below.

P.S. On a side note, when the team from Symbol Mattress saw the iComfort banner, they went to work that very afternoon and had a sign made up that said, “The best cheap-ass knock off in the industry.” Symbol put the banner on the company’s mattress display in the atrium. The banner lasted less than a day. SOMEBODY stole it! Great thought, but maybe next time.