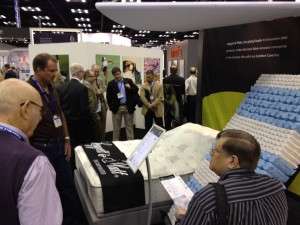 The ISPA EXPO 2012 is in the books, and what an event it was. I was able to talk to people from all over the world about their business and what was going on in their countries to drive sales. The lesson there is that even though we have had it tough in the U.S., there are other markets that are much worse off than we are.

I really enjoyed ISPA this year, but it was very busy for me. I sit as the current Chairman of the Better Sleep Council, so the board members got together for dinner and a meeting, where we welcomed in two new members: my old friend Mark Hobson and my new friend Scott Frisch. Don Wright and I sat on a panel for Withit, along with the opposing team of Cindy Williams and Kim Knopf, in a battle of the sexes discussion about how men and women see the industry differently. Julia Roisen moderated (poor Julia), and at the end of that hour, we came to the conclusion that the industry should NOT be focusing on either the male or female, but instead should address the segmentation of people out there that care about their sleep.

The highlight of the week for me was the customer appreciation party that Leggett and Platt threw on Thursday evening. We pulled out all the stops with an open bar and enough food to feed a small army (or, in this case, about 1,000 people). This year, the venue was an old train station and we had the band, Party on the Moon, blow it out for the second time in four years. WHAT A CELEBRATION! It is the highlight, because I know that our customers make us what we are and I love seeing them throw down and enjoy themselves so much. Thanks to all of you that attended.

Finally, there was the ISPA breakfast where Alan Hobson spoke about his trip to the top of Mount Everest and where they gave out a few industry awards. Karl Glassman from Leggett & Platt received the Russell L. Abolt Exceptional Service Award for having exemplified the highest level of career devotion to the well-being and betterment of the mattress industry, and boy did they get that one right. I hate giving too much of an accolade to anyone in a senior management position at Leggett & Platt as it flies really close to ass-kissing, but in this case, I have to just this once. I don’t believe that there is a classier guy that is more deserving than Karl. Those that really know him realize how humbled he was by it, which makes it that much better. In addition, the aforementioned Don Wright, who is the CMO of Wright of Thomasville, was given the Robert MacMorran Memorial Award in recognition of his outstanding service to the industry by the suppliers council. I am honored to call Don a friend, and grateful that ISPA made two great selections this year!

The only downside to the week was walking the convention floor and looking at all of the pretenders, if you will. Many got it right with great displays, beautiful booths, and innovative product approaches that will help the industry get better. On the other hand, you have the people that show up and make no effort at all in how they present their products, simply knocking off the companies they compete against. How about we take a page out of the NCAA Tournament for ISPA 2014 in New Orleans? Everybody who wants to present new products sends in a submission as to what they want to show, and they get selected and put into a bracket. A committee then selects a winner and narrows it down to a smaller group that actually gets to attend the show. We have less exhibitors (who get charged more, of course, to keep revenue up) and it takes less time to shop the event, giving us more time to enjoy the city in which it is being held. Everybody wins. Maybe not. It is just an idea, and given that we are in the middle of the tourney, I was inspired, so give me a break. Go Jayhawks! What do you think? Will Kansas win it all? Tell me in the comments section.

9 thoughts on “What ISPA Can Learn From the NCAA Tournament”