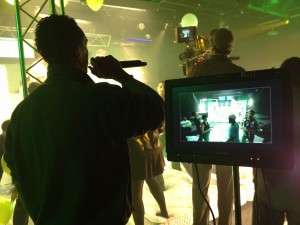 The new music video we are producing is called “Get Hybrid” and our team just got back from production in Chicago. We are working with Second City Communications, the business arm of the famous improv comedy house. I feel lucky that I get to work on projects like this because I’m able to collaborate with some wicked smart people, exercise creative muscle, learn a lot, and minus the moments of sheer panic it’s just a lot of fun.

Now that filming is over, I’m wondering if our audience (in this case the mattress industry, not necessarily the consumer), is going to like it as much as I do. I am more inclined to take chances than most, and with this creative solution there is definitely some risk. We basically produced a hip hop video about coils and hybrid mattresses. Sound risky? You bet. There’s a chance the audience won’t like the video. It’s also possible that some people may not like the message, or might even get offended. At the end of the day you can never be 100% sure of anything. You just have to trust your instincts and general knowledge of the audience you are trying to appeal to.

What I do know is that people will criticize you no matter what you do. You will get beat down for a weak attempt no differently than you will for being bold. Let me say that again: Critics will dish out the same amount of disapproval for weak attempts as they will for bold attempts. You might as well swing for the fences. I have said it in past blogs: When you measure the risk and reward of an approach, as the risk increases the reward also grows. I say go big or go home!

If we miss with our “Get Hybrid” initiative, I am prepared for the critics to be out in full force, but I don’t think that will happen. From what I’m hearing, most people are actually excited to see somebody try new things and inject something fun into this industry. All I know is that if we were to run a Leggett & Platt Comfort Core ad in every edition of Furniture Today for the rest of the year, we are not going to make the same impact as doing something like the “Get Hybrid” video. So, tune in and sound off. I want to hear what you have to say when it launches in mid-May at www.Ultimate-Hybrid.com. Speaking of Furniture Today, we were fortunate enough to have Executive Editor Dave Perry with us during the shoot and he’ll have his take on the project featured on their website.

One thought on “Is it Risky? A Hip Hop Video About Hybrids”