Viktoria Komova completely unraveled in tears as she won the silver medal. As I sat there watching the Russian gymnast step onto the podium to accept her Olympic medal, I thought…this girl just accomplished something very few people in the world ever will, and she is breaking down in tears, distraught and defeated because she didn’t get a gold.

It made me think about an article I read about the psychology of winning or losing Olympic
medals. A team of researchers found that people who won gold were the happiest (obviously), 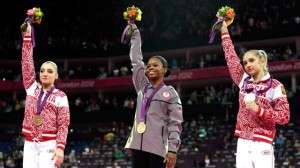 Think about it. The people winning silver are let down and less happy because they barely missed gold. But the guys and gals who win bronze are thrilled because they made the medal stand—bronze medalists are thinking, “I was so close to getting nothing!”

Can you relate? Where is your business today? Are you winning the gold, or fighting like hell but constantly coming in second and griping about it? Maybe you are you working hard and just happy to be on the medal stand. The one thing I am sure of is that the people winning the medals did everything in their power to make that happen. Sometimes they get third and sometimes they get second, but they keep coming back to go for gold. If you boil it down, that’s what we’ve got to do in business every single day.

There’s some good news—in the business world, all of your efforts don’t come down to a single race that decides your fate. We get to choose winning and losing every single day when we turn the doorknob to our workplace. I do love a great sports analogy, so I will finish with one more: Training, hard work, incredible coaching, strategy, focus, an insatiable desire to win, and the mindset that says I can are the keys for us in the mattress industry just as they are for our Olympic athletes. Don’t be like the badminton teams from China and South Korea, slumping your way through just so you can play easier opponents in the losers’ bracket. Go for the gold, get your company on the Wheaties box and kick some butt today.