This past weekend I went to Arizona and enjoyed one of the best times I have had all year. My wife Bridget and I traveled with Karl Glassman and his wife Cathi to the Arizona Biltmore, 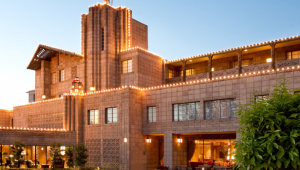 where we met 450 of our closest friends at the incredible property inspired by the design of Frank Lloyd Wright. Karl served as Honorary Chairman for the Seena Magowitz Foundation fundraiser. We were able to raise over $600,000 that will help fund research to find a cure for pancreatic cancer — one of the deadliest and least funded forms of cancer there is.

It all started Friday night, when we had our opening cocktail party and Monte Carlo Casino event. It was a perfect venue to catch up with old friends, make new ones, gamble with someone else’s money, and eat way too much of the terrific food they were serving. My good friend Mark Kinsley, who is also my head strategist and communications expert, was there and actually ended up winning the most chips that night with over $57,000. I am sure he wishes he had been in Vegas with real money. 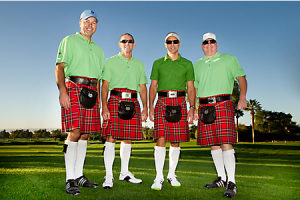 On Saturday there was a tour of a very exclusive jewelry store, a gourmet chocolate exhibit led by one of the lead chefs at the Biltmore, and of course there was the big golf outing. This year we threw in the added excitement of the UGLY golf pants contest and I am happy to say that we had some people that took this very seriously. My hat goes off to the gentlemen at Sleep Train, who were courageous enough to sport their bare legs in these very sexy red kilts. 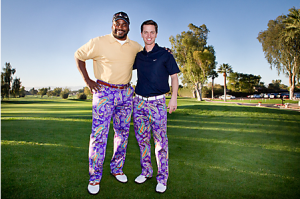 Not only did they win but they knocked it out of the park. Our runners up were Mark Kinsley (remember him?) and Vince McBeth, who both happened to show up in the same version of these very ugly purple paisley golf slacks. (How embarrassing to be caught wearing the same pants, eh?)

Karl Glassman, my company’s Chief Operating Officer, happened to be this year’s honorary chairman and did a great job of hosting the lunch that followed the golf outing. Here we learned from Dr. Von Hoff and the TGen team about the progress being made in pancreatic cancer research. It is a terrible disease, but TGen’s brilliant team gave us hope. They are making real progress. Elizabeth O’Connor, one of Dr. Von Hoff’s patients, is a great example of that. Her dad Randy got on stage and told the story of how his daughter was diagnosed with pancreatic cancer after having some complications during the delivery of her baby girl. Elizabeth has been fighting now for two years, thanks in part to the work of Dr. Von Hoff and the great people at TGen. There was not a dry eye in the room after that dad stood up and talked about his daughter’s struggle and we really appreciate that he shared his family’s story.

To wrap up the event, Roger Magowitz put together a great show featuring Alyssa Bonagura, Ira Dean, and Brooke Burrows. These guys are really great musicians and played their hearts out for the cause. Ira used to play with Trick Pony and currently writes songs for Montgomery Gentry, but I think he could have a dual career as a comedian since he kept us laughing all night.

If you attended the event, I would like to thank you on behalf of Roger Magowitz, Karl Glassman, Dr. Von Hoff and the rest of the TGen Staff, the thousands of patients suffering from the disease, and their families. If you did not attend, I would like to ask you to put it on your calendar for next year. Ask anyone that goes and they will tell you that it is the event of the year. We promise a lot of fun and when you leave, a feeling like you did something important with your time. If you were there, share your favorite memories of the weekend in the comments section. If you weren’t there, I hope to see you next year. In the meantime, check out this photo album. Thanks again.

I’ll leave you with a song written and performed by Alyssa Bonagura. She wrote it about her friend Nikki Mitchell who is battling pancreatic cancer (Nikki also spoke at the event).

P.S. Thank you Roger for your heart and the effort you put behind honoring the memory of your mother.

2 thoughts on “Inside the Biggest Bedding Industry Fundraiser”