So I am on vacation and end up sick in my hotel room while the family plays on the beach. (Cue the violins, please.) This is not a total loss, because as I am lying there in bed, I discover this series called “Breaking Bad” on Netflix. Ever see this show? Wow. Anyway, this girl (Krysten Ritter) is in 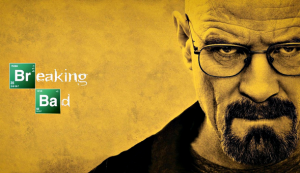 bed after dying from a drug overdose and this guy (Aaron Paul) is trying to give her CPR. She is clearly dead but he just won’t give up, which brings me to my point. (Were you wondering where this was going? I wanted you to have a small look inside my head to understand how I come up with some of this stuff.)

This year, I watched a guy in my company take a project that was absolutely dead more than once and bring it back to life. He ends up taking it to the finish line and as a result we have a great opportunity to build a nice business with the new product we acquired.

Are you the person that won’t give up? Do you call it early because there are too many roadblocks?

I understand — there are times when you just have to let something go because there are too many problems. On the other hand, we often give up too early. Yes, dealing with morons in your company that don’t get it or want to derail your project can be a real pain, but don’t take your eyes off the prize. Build your team of advocates, plan your strategy, create your story, and sell your butt off.

Too many people choose the path of least resistance because it requires less effort, there is less conflict, and there is no need to flex your muscle. Take that project you are thinking about right now and DRIVE IT HOME. Isn’t it almost always true that projects requiring the most effort also deliver the sweetest victory?

Take a step back and analyze what has caused your project to stall. Maybe even have a friend outside your company take a look with fresh eyes and then create a plan to get past the problems. Once you do that, you can get it rolling down the hill and over the people that were standing in the way.

Have you given up too early on the girl dying of an overdose? In the business world, it often pays to keep trying and push past the stall point.

Are you locked down at the moment? Share your thoughts in the comments section below.