The following is a guest post by Mark Kinsley.

Casper was a friendly ghost. 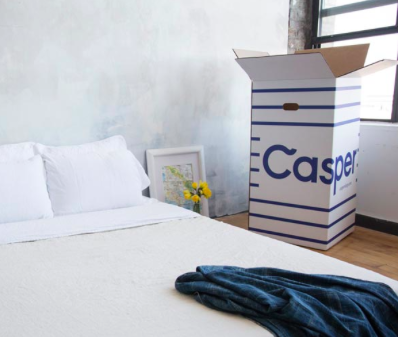 In the mattress industry, Casper is the brand that wants to kill.

They want to kill the bad experience. Murder the margins. Bury the slimy sales guy. Cut out car trips. And put industry charlatans under the blade of a glistening guillotine.

Doesn’t sound too friendly to me. But this was inevitable.

Smart, tech-savvy entrepreneurs are salivating over stagnant industries that need a new cop on the force to shake things up. The mattress industry is ripe. Casper and Tuft & Needle are sleep startups making headlines with their sleek approach to mattress buying. They’re replacing smoke and mirrors with elegance and transparency.

How could this work?

I think Casper CEO Philip Krim said it best in an interview on TheVerge.com. “We looked at the hotel industry, where they don’t ask you what kind of bed you need, and in general people love sleeping on hotel beds.”

As you know, comfort matters, but too many choices is the same as no choice. It creates analysis paralysis. Instead of asking customers what they want, Casper and Tuft & Needle tell people what they’re selling and why it’ll likely fit their needs. Limit their choices. Act as a filter. We’ve been trained to believe options are good, but it’s getting hard to navigate a noisy world.

Beyond the limited SKUs, Casper offers a 40-day hassle-free return and Tuft & Needle gives you a 30-night trial. As painful and opaque as the mattress-buying process can be, they’re instilling confidence and overcoming consumer objections. On TuftandNeedle.com, one of the buttons on their main navigation is The Truth. Don’t for a second scoff and brush off this section as some sort of hippie higher-sensibility philanthropist vomiting visions for a better world. I’d bet a solid sum they developed this section in response to data or some kind of reliable intelligence. And they’re supporting an open dialogue by exposing secrets of the mattress industry. Just look at their mattress markup infographic.

You might be saying, all this simplification and transparency is great, but are they selling product? In short, it looks like each company is doing well. On Casper’s blog, the two most recent posts are apologies for delivery delays. After launching April 22, 2014, they unexpectedly burned through their initial inventory. And Tuft & Needle’s mattress is Amazon’s highest-rated bed. Those aren’t hard figures, but all signs point to success. And if this new business model is the bleeding edge, what does that mean for you?

For an industry hell-bent on delivering comfort, we often make the shopping process painful and pressure-filled. And my generation doesn’t accept the status quo. If there’s a better way, we’ll find it. My friend Michael Magnuson at GoodBed.com endured a painful shopping experience out of which grew the number one mattress review site on the Internet. Guys like Magnuson, John-Thomas Marino, Daehee Park, and Philip Krim do not care about the way it’s always been done. The great equalizer is at our fingertips and they know how to use it (Internet). That’s reality.

5 thoughts on “Casper Wants to Kill”