Seriously give this some thought: To oversimplify it, you have to take the product you are trying to sell, determine what makes it better than what everyone else has, find the right audience, and find the right communications tool to speak to that audience (which now 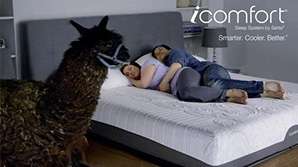 means selecting one of 1,000 different television/radio stations, direct mail, a million different web portals, SEO, SMO, PPC, should I go on?). On top of that you have to find a snazzy creative approach to tell your story in a way that delivers on the business objective, so you had better be a hybrid of creative genius and salesperson all in one. All of that to say, I think Serta has it figured out with their new campaign (videos below).

Andrew Gross, the Senior Vice President of Marketing for Serta, has been hard at work with the new spots for iComfort and I really think they nailed it.

Here are five reasons I think the Serta approach is going to find the sweet spot with the consumer:

In addition to these commercials, Serta produced a series called “Fall in Love with iComfort” in which they went into people’s homes, had them try out a new iComfort, and then chronicled what happened next. You heard the couples say things like, “I look better, my husband isn’t as crabby as he used to be, I don’t sleep hot like I used to, and I am not in pain anymore.” Not much new here, but Serta gets a lot of credit for the way these were shot and for keeping emotion in the message. EMOTION drives a purchase, NOT LOGIC. Price and promotion are certainly important, but it should not start and stop there like what happens with so many retailers. I especially like how they all end, which I will let you discover on your own.

Take a look and be the judge. Did Serta get it right? Did you crack a smile or relate in some way?