When I first started out in this business working for Stearns & Foster, I didn’t have a strong brand like my brothers and sisters selling the Sealy brand. (I use that hyperbole because we were related, but at the time the Stearns guys were the distant stepchildren of the family.) We had to work a lot harder to sell our line using other features to create value and leverage. 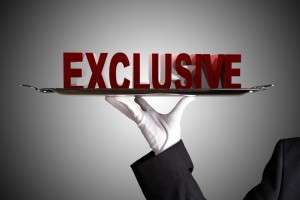 One of the things we used to say during RSA training was that Stearns & Foster was a great line to sell because our products were more exclusive in the marketplace. Translated, we didn’t have the distribution other big “S” brands did. I would ask the RSAs, “If I told you that I was going to give you a product as an exclusive in the marketplace with incredible features and benefits like 8-way hand-tied foundations and real foam-encased borders, would you be able to sell that line successfully?” They almost always applauded those comments because they were tired of being shopped to death on their other lines. Here is the reality, though…when people aren’t coming in to cross-shop you on popular products that are being heavily promoted in the newspaper, it is in itself a problem.

I was recently in San Francisco (more on that trip in a later blog), and we stopped in at a Tesla car dealership. We wanted to see what those guys were up to because they are changing the way people make and sell cars. I asked our salesperson why Tesla gave away all its patents so that anyone could develop on their platform. Her answer? “We wanted there to be more competition.” How often do you hear that?!? They know that if other car manufacturers start designing more cars that run on electricity, then more charging stations will get built, making their technology more and more relevant and accessible. In this case, competition is a GREAT thing.

I know that more often than not, competition makes it tough on your top and bottom line, but there is a lot of good that comes from it. Competitors make you better, stronger, more innovative, sharper on pricing and cost-cutting, and overall, more aggressive. Companies like Tesla are so confident that they are willing to just open the doors to all takers, essentially saying, “Step up, pretenders. Even when I give you my playbook, I am still going to kick your butt because we are just better than you and will always stay one step ahead of you.” That is pretty tough, if you ask me.

So where are you when it comes to competition? Does it fire you up or give you heartburn? Share your thoughts in the comments section!

2 thoughts on “When Is Exclusivity a Bad Thing?”