In a moment we’ll get to the story of the scullery maid. First I want to talk about kids.

During a career day panel, I asked a classroom full of teenagers, “How many of you think it’s important to follow your passions?” A hundred hands shot sky-high. “Well, you’re wrong,” I said. The teacher was incensed at my comment, muttering her strong 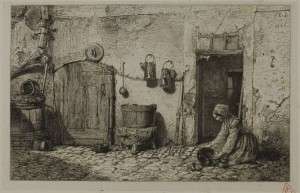 disagreement over a swell of conversation. Here’s why they were wrong: at that moment, their passions were boys and girls, football and basketball, Halo and Call of Duty. Follow your passion? Rubbish. Those passions would change in a year. My advice to them? Figure out how to be passionate, I said. Now that’s a worthy pursuit. But how do you learn to be passionate and how might that help you in life?

We go now to the story of the scullery maid, as told to me by Roy H. Williams, a New York Times best selling author and advertising genius.

The Story of the Scullery Maid

As a scullery maid, she scrubbed stone floors. One day, with the afternoon off work, she went to listen to a famous intellectual speaking in her town. When his speech was over, nervous and timid, she mustered a moment of courage and stepped into the aisle to speak to the professor. She confessed that she wanted to be like the famous doctor and travel the world giving talks and sharing ideas.

“I’m nothing more than a scullery maid,” she confessed. “I scrub stone floors.”

With that they cordially parted ways. The scullery maid wasted no time. She went to her master’s home and examined the stone floors, asking him what they were made of. When her master told the maid all he knew, she went to the library to learn more about that particular kind of rock. From there she went to the quarry where the stone was sourced and the factory where they were shaped. She put all her newfound knowledge down on paper.

After months of research and editing, she mailed her paper to the professor and he replied with a simple statement. “Good work. What is under the stone?”

Excited that the man she admired had taken time to respond, but also confused by his question, the scullery maid walked over to a loose stone, lifted it from the floor, and saw a single ant. She replied to the professor that under the stone was a single ant. He responded, telling her to find out everything there is to know about ants and send him another paper. For this paper she went even further than the previous. It took her more than a year. She traveled to every library in the land, spoke with educators knowledgeable about bugs, and spent hours observing ants’ behavior in their natural environment. When the paper was complete, she mailed it to the professor and he replied.

“Congratulations, you are now the world’s foremost expert on ants,” he told her.

She spent the rest of her years traveling the world, sharing ideas and giving speeches about ants.

Passion isn’t always ignited when a person suddenly discovers an interest that fills them with sustainable excitement. The maid didn’t care about ants. But by writing about the stone floors, and the ants underneath, she was able to practice passion. The scullery maid’s unparalleled knowledge of ants became a vehicle for pursuing her passion for traveling the world and speaking about fascinating subjects. But without the ability to be passionate about stones and ants, she would still be scrubbing floors.

Have you learned to be passionate? Or will you spend the rest of your days on your hands and knees, dipping a rag into the bottom of a soap bucket, refusing to lift a single stone and study the ants?