I want you to walk into your boss’s office and let them know that starting today, you can help increase your companies productivity by as much as 34%. What kind of reaction do you think you will get? I would imagine that you would peak their interest in a significant way. I have seen people get incredibly excited over a 2-3% improvement in efficiency so theoretically, this should send senior management to the moon and back right!?! Not so fast.

According to ABC News, a study conducted by NASA says that a 26-minute nap can increase performance by as much as 34%. Forbes tells us that a 10-minute nap can produce immediate improvements in “all outcome measures” including cognitive performance. If all of this is true, and we can be more productive at work as a result of a little cat nap, say around 1:30-2pm after lunch, why don’t we support that in our own companies? Forget what the studies show, don’t most of us just know this based on our own experiences?

“Well it’s just not practical and would be very hard to implement.”  “We don’t have the space for a nap room.” “It would be too hard to police.” Come on people, I said increased productivity by as much as 34%, are you telling me that we can’t think creatively to find a way? It must be that we simply don’t believe in the research that has been done by guys like the National Sleep Foundation, or NASA on the subject, nor do we trust our own personal experiences. Really? 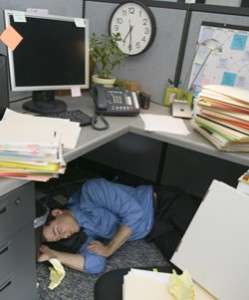 Companies like Google, Ben and Jerry’s, AOL, Zappos, and Nike all have found a way to make the nap at work concept a success so what is keeping us? Mark Kinsley at Sleep-Geek actually wrote about the premier nap pod company so check that out HERE. If there is anyone that should be doing great things in the work place in support of sleep it is the mattress industry! If you were to visit a company that manufactured exercise equipment and the senior team you were meeting with were all fat and out of shape, what would you think about that company? How about going to the home office of a big health food company and their café had no healthy food choices on the menu and the break rooms were full of vending machines featuring junk food? Am I off base here or do these analogies work for you?

If you were recruiting people to come to work for your company and they were to hear about your new nap policy, I am betting that you will automatically have an edge over other companies. Earlier this year, I wrote about keeping your people happy and how important that was to overall performance. Allowing people to get a little siesta in the early afternoon would make your team very happy AND, did I already mention that you can increase productivity by as much as 34%! Okay, now I am being annoying, but you understand right?

Do you really think that if people are tired, they are not zoning out at their desk anyway, staring at a screen full of numbers. When they get tired and can’t focus they are likely playing a game, Facebooking or watching REALLY funny videos for a break, like this one from TheEllen Show? People are wasting time due to fatigue caused by being tired so why in the world would we not charge our people’s battery a little and let them finish strong the second half of the day?

Your mission, should you choose to accept it, is to bring this up in your next meeting. Have a serious discussion about it and instead of thinking about all of the reasons it won’t work, problem solve around how to make it happen. Google and Zappos are pretty successful companies by my measure and I really doubt they would allow naps unless they really delivered some benefit, so what do you say, want to give it a try?

Does your company support a short nap in the afternoon and if not, why not?

BONUS: I know that this little kid napping has very little to do with this blog post but I had to share it cause it is so dang cute.