My 10-year-old son, Nick, had a big class presentation last week where he was to get up and deliver a weather report using the map on his classroom wall. The poor kid’s a lot like his father, so he wanted to go big and make an impact, not just deliver a report. He dressed up in a suit, rehearsed his lines, and set off to earn that A.

When he came home frustrated after the presentation, I assumed he’d forgotten his lines, or something like that. But it wasn’t that at all. Nick’s frustration sprang from that fact that a few of his classmates said that when they gave their presentations later on in the week, they were also going to wear a suit and copy a few other elements from his presentation.

I explained to Nick that having people copy what you do is great because, as they say, “imitation is the best form of flattery.” He wasn’t feeling it, but I further explained a few reasons that leading—not following—is the way to go, and when people follow you that is a good thing. When you lead instead of follow: 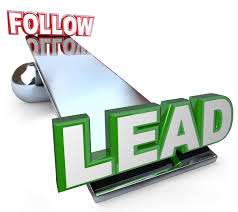 I was watching a commercial the other day and Gillette is now offering a subscription model for their razor blades to combat what Dollar Shave Club is doing to disrupt that industry. A small startup, Dollar Shave Club was a leader, and figured out a way to completely change the way consumers purchased razor blades. Now others are following suit, but not before DSC has taken some serious market share in the almost $13 billion dollar industry dominated by Proctor and Gamble. This is a great example of a startup schooling the industry big boys with creative ideas that made an impact. And they did it first.

Do you have the creative muscle in your organization to generate ideas that can lead your competitors in the mattress industry? I understand that it’s much easier to follow. There is less risk, and you save yourself some embarrassment should you fail. At the end of the day, however, if you let others lead, you’ll never realize the profits that are possible if you’re the one out front. I have heard some say that we are an industry of followers and so I gave that some thought. Pillow tops, one-sided beds, gel memory foam, hybrids, moving away from flexible foundations, and now temperature regulation, adjustable comfort solutions, and the integration of technology just to name a few. These are all areas where somebody has launched an idea, it was received well by the market, and in a few of these cases EVERYBODY followed suit. I don’t want to criticize our industry too hard because this happens all of the time in other industries as well, but it might be more frequent among the mattress faithful. Did Simmons have an early advantage being first to market on single sided? How about Tempur-Pedic or Select Comfort on memory foam and air?

Nick has this figured out now, and he’s very happy that his friends are following in his footsteps on this class project. The great thing about him—as with many of the leaders in this industry—is that he didn’t wait around for others to innovate. He’s already trying to figure out how to lead on his next project.

How about your company? Are you leading the way, or staring at the butt of the guy who’s always in front of you?