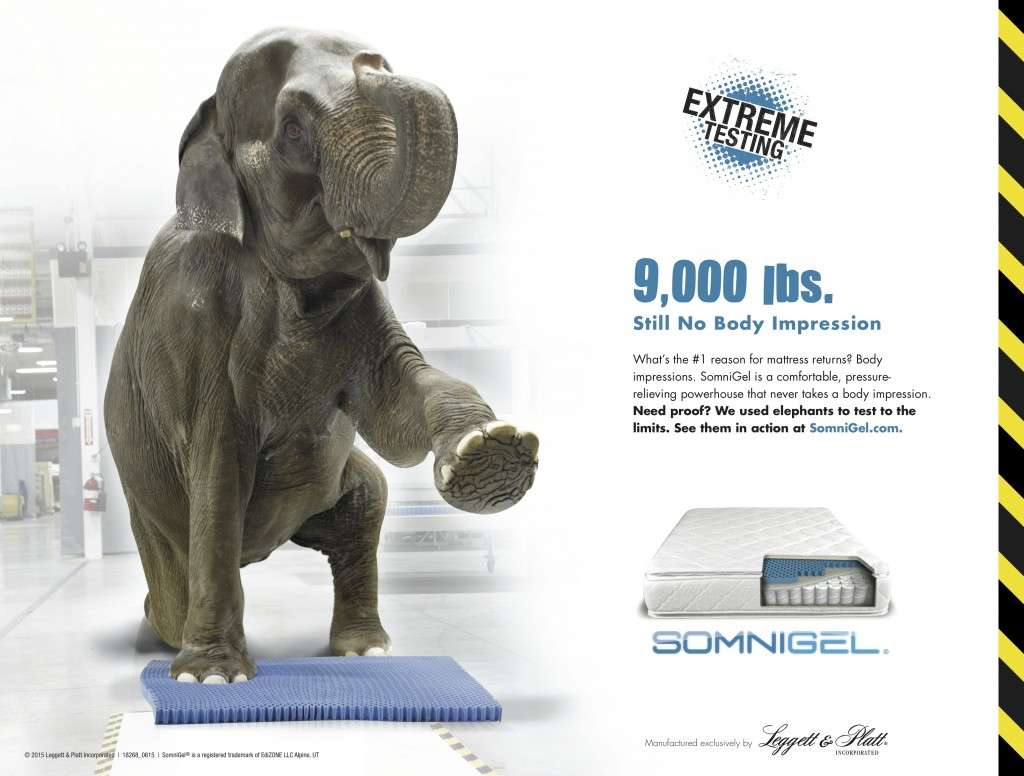 First, I’ll address the elephant in the room. The answer is, “No, Mark Quinn and I do not have a secret bet to see who can launch the most offbeat marketing campaign in the mattress industry.” But when I follow along as Mr. Quinn examines the 22 Immutable Laws of Marketing and how they can apply to the bedding business, inspiration tends to take over.

That’s where the elephants come in.

Watch this video, then keep reading to find out how this campaign for SomniGel used many of The 22 Immutable Laws of Marketing.

It was a crisp winter morning when the two 9,000-pound Asian elephants walked into Leggett & Platt’s IDEA Center. After putting our SomniGel comfort layer through they paces, they packed their trunks and went home. Under all that weight, SomniGel always bounced back. It is quite possibly the most durable comfort layer on the planet.

SomniGel is, in my opinion, an incredible component. It’s 100% real gel (not infused or sprayed) and the hollow columns comfortably deflect pressure. SomniGel’s contact surface is 78% open air and it is scientifically proven to transfer heat away from the body up to 93% more efficiently than memory foam.  It’s non-toxic and hypoallergenic and really fun to squeeze like a stress ball.

If this incredible gel has all these amazing benefits, why focus our marketing campaign on durability? In other words, why elephants?

It all comes down to positioning, and a difference between advertising and marketing. 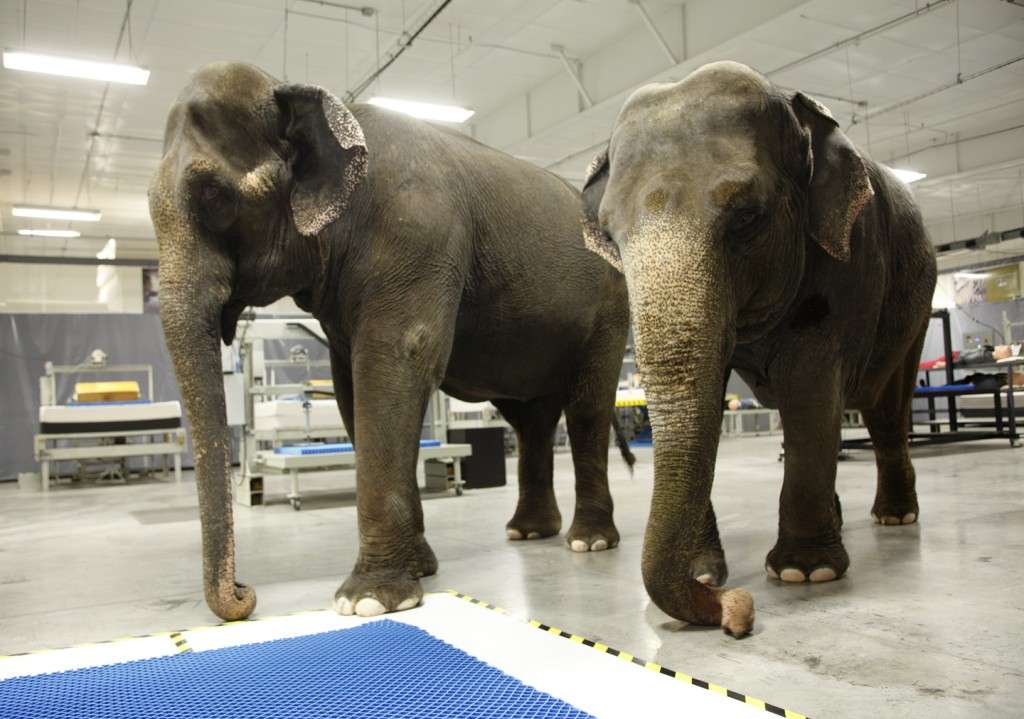 Positioning: The single piece of real estate you own in people’s minds.

Marketing: All the benefits a product offers your audience.

The first law from The 22 Immutable Laws of Marketing tells us the leading brand in any category is almost always the first brand into the prospect’s mind. When you think, “Who is the leader in bedding components?” odds are good you think of Leggett & Platt. That’s because we were, in many cases, first. We invented the bedspring and own more than 600 bedding components-related patents. But when you think of comfort layers, you probably think of foam—and when you think of foam, you may even think of a specific brand. (I’d argue that nobody really owns foam, but in consumer’s minds Tempur-Pedic owns “pressure relief” or “no motion transfer”)

Let’s assume in a consumer’s mind foam “owns” the comfort layer real estate. What should I do to promote our new comfort layer, SomniGel? The Law of Exclusivity says two companies cannot own the same word. That’s where the second law comes into play: if you can’t be first, then create a new category. Burt Hinkler was the second guy to fly across the Atlantic. Even though he was faster than Lindbergh, nobody really remembers Hinkler. Trailing both was Amelia Earhart who was third to fly across the Atlantic, but she was the first woman. She created a new category and that makes her memorable.

For SomniGel, the new category is durable comfort layers.

We often hear that the #1 reason for mattress returns is body impressions. In the overwhelming majority of returns, it is foam that’s breaking down. In creating a new category, it’s important to avoid shoehorning your product into a meaningless vacant lot. For SomniGel, we have a product that solves a real problem that can plague consumers, retailers, and manufacturers. 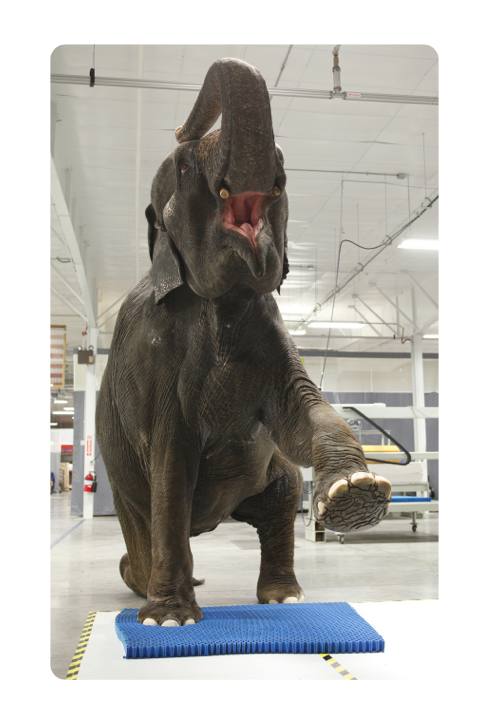 Why not concentrate on our other benefits like cooler sleep or pressure relief? It comes down to The Law of Focus and what I call creative potential.

In developing the SomniGelephants campaign we identified the main benefits and then had an open brainstorm around each angle. The conversation surrounding cooler sleep produced some fun material, and there were awesome ideas for promoting our pressure relieving properties. But nothing had the stopping power—and the demonstrability—of elephants testing SomniGel’s durability. Remember the old American Tourister commercial where they toss a suitcase in with a chimpanzee and it doesn’t get smashed or ripped? Same principle. Show and tell.

If you’re trying to find your focus, brainstorm around your main benefits (the ones you’re actually willing to trumpet) and find out which is most inspiring. Many times you’ll find yourself talking more about one idea over another—that’ a good indicator you’re onto something big. Don’t ignore it. Here’s an anchor if you feel your ideas drifting: Remember, you first must capture people’s attention or they will ignore everything you’d like to share. Think about it like this: if your best idea seems over the top and uncomfortable, you’ll probably default to the second best idea. But here’s the problem, does your second best idea actually grab people’s attention, or is it easy to ignore. Are you being a good steward of your marketing money if you know your idea is easy to ignore?

Zooming back out to our elephants idea, here’s the basic step-by-step breakdown.

Positioning is choosing your unique category (Law 2) or setting up a new category. The Law of Division states that over time, a category will divide and become two or more categories (the comfort layers category has fractured into several categories like latex and memory foam). SomniGel is aiming at splitting the category again to create durable comfort layers. Don’t be afraid to strategically set-up your own category.

Marketing, in this case, is the combination all benefits and selling points geared toward a specific audience. Use your category-specific, focused, big idea to grab their attention and they’ll be more willing to listen to the other marketing messages and benefits.

Advertising focuses on a single selling point. The Law of Focus tells us we can own one word or thought in people’s minds and for SomniGel we chose to own durability. Also, The Law of Sacrifice, which states you have to give up something in order to get something, meant we had to whittle away our main messages and use our primary selling point to hook them into listening. Your ads must stop people in their tracks—which dovetails with The Law of Singularity that states in each situation, only one move will produce substantial results. For SomniGel we could have tried to pepper all the benefits into our campaign and it would have been far less effective. As Ries and Trout point out, many marketing people seem to think the best way to grow is the puppy approach—get into everything. When you’re into everything, you’re maximizing nothing. The same goes for your advertising messages—when you try to tell them everything, you’re saying nothing.

Have you chosen your category? Does your creative have elephant-style stopping power? Are your marketing benefits real or contrived?

A BIG thanks to Mark Quinn for having me back as a guest blogger, and for putting together a great series on The 22 Immutable Laws.

Be sure to share your ideas and feedback in the comments.