I am back from vacation and I am fresh so thank God for time away! Before I get into this post I want to let you know that I will stop writing Q’s Views after 2-3 more post. I love writing this blog, but it’s time to focus 100% of my time on Spink and Edgar. I will however start a new blog that will be featured on the new Spink and Edgar site when we get that launched. The good news for me is that I get to start writing for the consumer instead of writing for the trade. This fires me up because I think there is a lot that needs to be said so I am going to dive in with some purpose.  I want to finish talking about the 22 Immutable Laws of Marketing and then I will post my final blog so stay tuned as I am sure I will be on a rant for that one. I will share some of my thoughts on the state of the industry as it currently is, and where I think it is headed so get ready to share your own thoughts!!!

Law #18 in the 22 Immutable Laws of Marketing is the Law of Success which basically says, “Success often leads to arrogance, and arrogance to failure.” I have seen this story played out so many times where a company is rolling along and doing great, and they start to lose their objectivity. I think it is true that success breads success, but that same success can cause you a lot of pain if you don’t treat it right. I have talked about the Tempur-Pedic launch of Simplicity in a past blog so I will try not to rehash what has already been said. The summary of it is that Tempur-Pedic believed that they could defy basic merchandising laws, build an inferior bed to the competition and succeed. I would love to have been in that meeting where they placed Simplicity next to their competitors, clearly saw that it was NOT AT ALL competitive to what was already on the floor at those prices, and then someone made the decision that it wouldn’t matter. I am sure part of that process included giving a lot of credit to the Tempur-Pedic brand to carry it into a successful position. It didn’t work. Their competition was no better early on, thinking that just because you had a big “S” brand you could market your memory foam product across the aisle from Tempur-Pedic who actually launched the platform and owned the category.  At first some of the “S” brands started selling memory foam $100 above Tempur-Pedic and when that didn’t work, they started reducing prices. A lot. 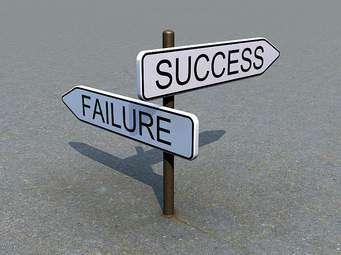 The Law of Failure speaks to the idea that many companies are risk averse because many of the senior executives making the big salaries don’t want to rock the boat and screw something up. They are making a lot of money and to take on risk just doesn’t make sense to them which is why you have to mix up your talent at the top! If you have people in key positions just coasting in for retirement, you could have a problem. “Nobody has ever been fired for a bold move they didn’t make.” Take a look around your organization. Get out your pen and make a list of the guys/gals that are pushing the envelope, driving new ideas, thinking of ways to get more out of your business but with some greater risk. Who are they? Do they even exist? According to the book, “Failure is expected and accepted.”

Next week I will cover the Law of Hype and the Law of Acceleration so stop back by for a quick read. The last chapter of the book talks about the Law of Resources so I will attempt to tie that back to the industry, along with a score card on Spink and Edgar through the filter of the 22 Laws, (did we follow the rules) and then I will publish my last blog post the week of August 24th so stay tuned.