If you listen to some of the top business leaders out there, many of them will tell you about a mentor that they had rising through the ranks. For Bill Gates, it was Warren Buffett. For Jack Welch it was his mother. So what impact can mentors have?

I have had several in my career. Two of them have been involved since the beginning (literally), and a few just in the last decade: 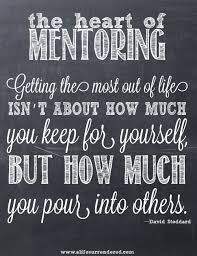 I will always be grateful to these people that helped to shape my life and business career. The impact they have had on me will last a long time and hopefully benefit others that come into my circle. I know that I would not be where I am today if it were not for their kind hearts and influence. Because of what others have given to me, I try very hard to be that to those that ask it of me. Another mentor of mine from a long time ago was Roxanne Stevens at Sealy who once told me that she thought that her most important job was to help me get better at mine. She did, and I hope to do the same for the people that look to me for help.

How about you? Do you have a mentor that made a big impact on you? Are there people in your universe that would look at you as their mentor? If not, I encourage you to be that to someone because you can usually learn just as much from them as they do from you.