Yesterday my brother and I got into a disagreement that I need your help to resolve. We were talking about my last post where I call out some of the bed in a box guys as liars. His comment was that my choice of words was a little harsh. Then I read it to my wife and she was fine with it until I got to the meme that said, “I’m always disappointed when a liars pants don’t actually catch on fire.” At that point she started to agree with my brother. What do you think? Am I playing too rough with this or is my choice of words appropriate? Tell me in the comments section! On another note, take a look at my friend Wes Harrington’s site New Sleep.  They sell direct and even have a video that addresses this issue directly. They even use the “shoe” analogy I did. I didn’t see it before writing my post but want to give proper credit so check it out.

Now for today’s business. When I was at Leggett and Platt we created an ad that ended up being one of my favorites. There was a photo of a little boy standing on the beach with his towel wrapped around his neck serving as a cape, striking the full on super hero pose with hands on hips. The caption read, “Did you ever dream about being the man of wood?” There is a new push by Leggett to speak about the benefits of having steel in your box spring vs. only wood. If you go to steel-strong.com you can watch a quick video on why box springs made with steel have a higher perceived value than those made only of wood.

Here are the statistics: 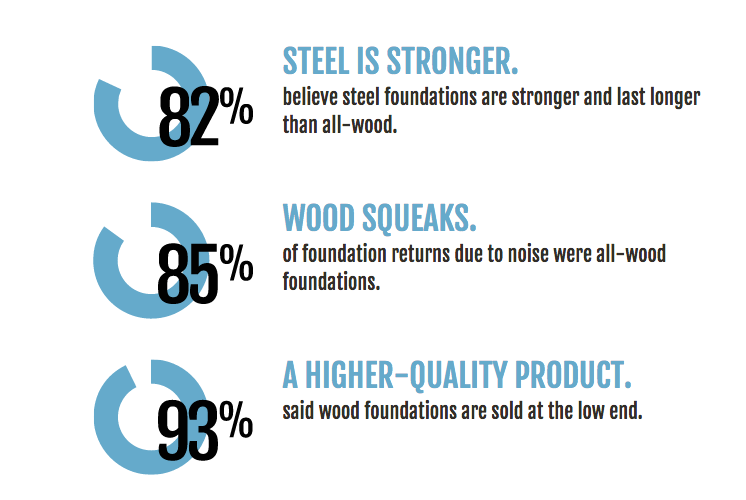 One could argue that there are people in the market today having great success selling wood foundations. One could also argue that the box spring doesn’t come up all that often when selling a mattress, so much of the time it is a mute point.

Some additional thoughts on the subject:

When I was at Leggett and Platt, the reason we produced a rap video about hybrid mattresses is because Tempur-Pedic and Select Comfort were spending big money to tell consumers that mattresses made with innersprings were BAD and old fashioned. In a way they had a point because the reference to “innersprings” could speak to beds selling at $49 OR mattresses positioned at a $50,000 price point. The attack lumped the low end in with the high end and we needed to separate the quality innerspring beds from the opening price points. There is a little of that same problem with wood build-ups. The very low end uses wood as a foundation and are likely not made as well so the mattress can hit a price point. There are much better wood platforms available but there is nothing to really distinguish those. Therefore from a consumer’s perspective, it could be viewed as the same thing.

No matter what you are selling in your box spring, continue to make it a quality platform. If a bed comes back due to poor construction you hurt your brand, cause great trouble at retail, and become a problem for the consumer. At the end of the day, all box springs have wood as part of the construction so be sure to train your team on why your wood is better, and explain how you quality control your products.