Today I am writing to tell you about a CRAZY story and to celebrate one of my hero’s. If you have been reading this blog for very long you have probably heard me talk about my 14 year old daughter Gabby and her softball team. She has been a part of the Battitudes family for the last 4 years and I say family, because that is exactly what it is.

Every year we play we end up at some big tournament to end the season. This year we played at a World Series in Iowa for the 13 U division and finished in the top 15 so for us, that was a pretty disappointing result.  The final tournament this year was in Arkansas at the 14 and under National Championship. There were about 40 teams from several states so we knew we had our work cut out for us; especially playing against older girls.

So….we lose our first game to a team we should have beat so we were on some shaky ground right at the beginning. Every game right before they take the field I go out and say a few words to the girls in a huddle and we pray together. After that loss I started telling them that the team that plays mentally tough would win it all. Boy was I right. After that first game we got busy and won every game, making it to the championship on Sunday. Our girls were ready and there was absolutely no way they were going to lose. Do you ever just have that feeling? They did and it showed.

Final game, 4th inning we are up 3-1 and we are batting. We have bases loaded with no outs and their pitcher throws an illegal pitch which walks in another run for us making it 4-1. The other teams head coach storms on to the field, confronts the home plate umpire and and gets ejected from the game. He gets so mad after that he starts to scream at the official standing inches from his face, chasing him around the diamond. (Keep in mind that this coach stands about 6’5″ so he is an imposing figure.) He finally gives up, walks off the field and tells his girls to get in the dugout, that they are all going home. WHAT!?!?!?

So this coach robs these girls of their chance to compete for the championship. Like us, they have worked all year to maybe get lucky enough to make it to that moment and create a memory that will last a life time. Their coach was not mentally tough enough and cost them that dream.

We were outraged by this and protested through the fence but it didn’t matter as we realized we weren’t going to change anything. So we watched those girls as they packed up their gear while big tears streamed down their faces. A few thoughts for parents with kids playing competitive ball of any kind: 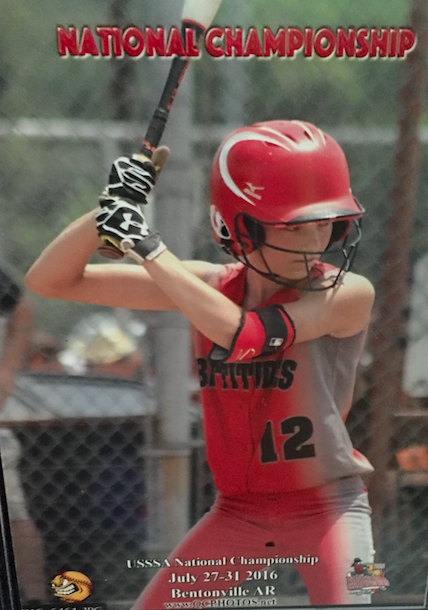 After four years and over 400 games the Battitudes took home a National Championship title. To say I am proud of Gabby and her team mates would be an understatement. They worked their butts off and earned what they got. The team is at that point where they are entering high school so this could be their last season together. What a way to finish.

No matter what you are working on, how discouraged you might get along the way, or how many years you go home from the tournament without a medal, stay after it. Work harder, stay mentally tough, and your business will get where you want it to be. A perfect lesson given to me by my 14 year old, I hope it resonates with you as well.

PS. The coach from the other team sent us a nice note apologizing for his actions so I hope that he is able to reconcile that moment. There is learning there for him and that team so as bad as it was, I know some good can come from it.