Mark Kinsley and I took the Dos Marcos show on the road this last week to New Orleans, Louisiana for the big Nationwide Primetime event. Over 4,000 people gathered together from all over the country to take advantage of show specials, eat great food, see old friends, and learn. Something really great happens when you get together with a bunch of people that are trying to figure it out just like you are.

Dos Marcos was asked to give a speech to over 500 people in session #3 of their Mattress University. Session #1 was the Chief Sales Officer for Serta/Simmons Bedding where he was interviewed on stage by Jerry Honea the Senior Vice President of Merchandising at Nationwide. Session #2 featured Jerry interviewing Steve Rusing, the VP of Sales for Tempur/Sealy and we heard both sessions went very well so congrats to all. But by the time Kinsley and I got on stage, it was 3 pm, the death time slot where people are getting tired after lunch, and since you are in New Orleans you could actually hear Bourbon Street calling you. We knew we had to bring something big or people were going to snooze right through it. Our talk was titled “5 Fights That You’re In And Have To Win and it started out to the Rocky theme song blaring over the speakers, Kinsley dressed up like Rocky and me as his loyal trainer Mick, busting through the doors at the back of the room and shadow boxing our way to the stage. I won’t get into the details, we will be posting a video of it when those edits get done, but I will say that we had a blast and it ended with a standing ovation. Mission accomplished.

In addition to the speech, we were asked to record 25 mini-podcast with Nationwide retailers so that they could use this format to tell their story. So many retailers out there don’t do a very good job of connecting their customers with the heart of their company so we had people tell us how their company got started, what makes them better than their competition, and gave them a chance to talk about all of the cool things they are doing to serve people in their community. Then they can use this audio/video from the podcast and share it on their social media platforms and their “About Us” page on their websites. All of these retailers did a fantastic job with us and we had a great time getting to know them so a big THANK YOU to everyone that participated.

We also took a ride on a rickshaw, attended a BLOW OUT hugely successful launch party with Tempur/Sealy, recorded a music video with our awesome friends from Sweet Dreams, and had an incredible meal at the legendary Commanders Palace in the Garden District. Kinsley says it on our podcast all the time….experiences are transformational. When you attend something like this great things happen.

First, we want to thank Mike Whitaker at Nationwide. He is the guy that drove the decision to sponsor the Dos Marcos podcast but also had the idea for us to speak at Primetime so we are very grateful to him for the opportunity and for his friendship. Mike is an amazing person that goes to work every day to help people be better at what they do and we are so grateful to know him. Then to Jeff Rose the Director of Furniture and Bedding, who after hearing the idea of our speech and corny antics, not only trusted us to pull it off but actually got on stage with us and helped act it out. YOU DA MAN.  When you have the hero fighter or the “Rocky” character also known as “Nationwide”, you have to have a villain right? Well, Thanks to Johnny Lamp, the Director of Furniture playing the role of “Amazon Fighter” we did. Johnny was accompanied by Chad Fisher his “ring man” and Bedding Director at Nationwide and the two of them were the perfect antagonists. We also want to thank the very cool crew at Prime Media…you guys killed it, Lucas our videographer, and Tom Hickman the President at Nationwide. I didn’t know Tom prior to the event and didn’t spend a great deal of time with him at the show as he had much better things to do, but I was around him enough to know this…he has a servants heart and inspires that in the groups culture as they work every day to put their member at the center of everything they do. Kinsley and I were behind the scenes for this event and we can tell you, it’s not something Nationwide just says. These guys live it which is why Dos Marcos is such a good fit here; we all just want to see people grow inside of this crazy industry.

(Check out this music video written by our friends at Sweet Dreams Mattress and Furniture Store in North Carolina and performed on the show floor on the last day. Andrew Schlesser wrote the lyrics, we borrowed the melody and Kinsly kills it on the guitar. This entire video was produced in under an hour; maybe that’s obvious. 🙂 Thanks to Prime Media for shooting and editing this together for us.)

On behalf of Kinsley and myself, we want to say thank you not only to everyone at Nationwide but also to PureCare our other rock star sponsor and all of the retailers at the event. We had an incredible time and can’t wait for February in Houston! The question is, what movie will we use to inspire the next speech? Float your suggestions in the comments section! 🙂 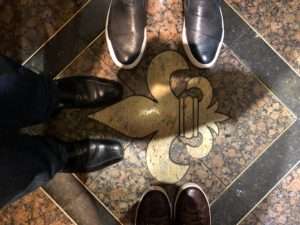