We had another incredible weekend thanks to Roger Magowitz and the Seena Magowitz golf classic. Roger has been working hard along with Dr. Daniel Von Hoff and the great people at tgen, to find a cure for pancreatic cancer and I am happy to report that they are making some great progress. They are extending life for people and getting much closer to finding a test that will help in early detection. Roger, Liz McBeth and everyone else involved… thanks for what you do and for putting on a first-class event! 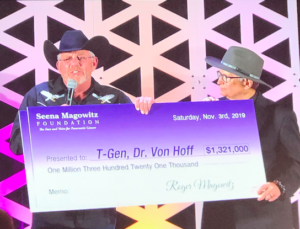 On Saturday we visited a dude ranch where Kinsley and I had a vicious competition in three events…bow and arrow target shooting, hatchet throwing and steer roping. It was close but in the end, I pulled it off and won the cowboy challenge which is a big deal because Kinsly beats me in just about every competition we have. (I blame it on my age and the fact that he has way better hair.) Then Kinsley and I were invited to the big arena to compete against Phil Sherman from Customatic, and his team to milk a goat. Phil’s group didn’t just win, they obliterated us HOWEVER, it turns out that Phil was a ringer. He was named the #1 goat milker on the east coast as a member of the Future Farmers Of America, so it was never really a fair fight. (I may have that detail wrong but we are going with it.) On Sunday people played golf, Kinsley and his foursome won the ugly golf pants competition AGAIN, and I went on a hike to see if I could climb Camelback Mountain. I did and lived to tell about it and had an incredible day. 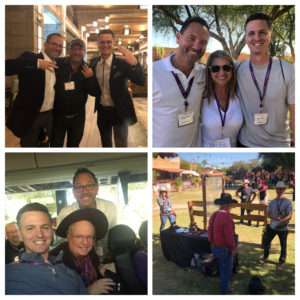 The best part of the weekend is always the dinner on Saturday night where we get to listen to Dr. Von Hoff talk about the progress he is making, Kinsley and I get to be auctioneers doing our best to extract money out of the audience, and this year we heard from several of the WARRIORS currently inflicted with pancreatic cancer. These people have every reason to have a bad attitude, feel sorry for themselves and be angry at the world but that’s not what you get from them. Through tears, they express their gratitude for Dr. Von Hoff, their friends and family, and everyone in the room standing with them in their struggle. They talk about the love they have for the people in their life and they express their HOPE to one day find a cure for it all. They are fighters and they inspire me in ways I can’t express in words.

Dr. Von Hoff, in my house we pray for you and Ann often, and for the people you work with and the patients you care for. Thank you for who you are and for the incredibly bright light you shine.

6 thoughts on “Magowitz Does It AGAIN!”