When I was 12 years old I would wake up on Sunday morning in Houston, Texas and watch professional wrestling. This was before the WWF, I’m talking about guys like Andre The Giant, The Von Erich dynasty and Dusty Rhodes. My brother and I would watch and then throw pillows on the ground and practice body slamming each other before we had to go to church…those were the days. When they cut to commercial, this crazy guy Jim McIngvale (Mattress Mack),  would do a live spot ringside talking about his furniture business, and then he would take money out of his back pocket, jump up in the air, and tell his audience that “GALLERY FURNITURE REALLY WILL, SAVE YOU MONEY!!!!!!!!!” I had no idea at the time how much influence he would have on me later in my life. But Mack hasn’t made an impact on just me, he has made a dent in the entire industry and his community.

I first met Jim in 2008 when we launched the concept bed Starry Night at the Consumer Electronics Show when I was working for Leggett and Platt. After a private demonstration of the bed in Las Vegas, he loved the concept so much he literally jumped in the air with excitement because that kind of innovation FIRED HIM UP. (I agree with Simon Sinek, it’s funny how you connect with people that believe what you believe.) Later on, I heard him speak at an industry event and my respect for his approach to business grew even more. I recently picked up his book Always Think Big written back in 2002 and I wanted to share a few of my thoughts. 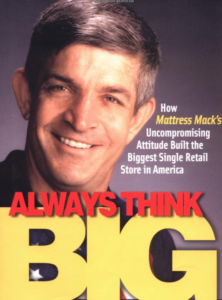 Jim believes that if you THINK BIG, great things will happen and he even gives you a road map to make this happen:

When I think about the best retailers in our industry, they are similar in many ways. They have figured out a way to connect to their consumers in an emotional way creating a preference for their stores. They deliver a great shopping experience with unique products and a strong selling process. They put the consumer at the center of everything they do, and they value innovation at every level. Jim McIngvale is without a doubt, one of the best.

2 thoughts on “Are You Thinking Big?”